A Fete Worse Than Death 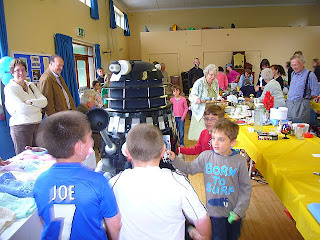 On Saturday, I went to the Summer fete at St Andrew's church in Caversham. The vicar there, Nigel Jones, is an old friend of mine, and he asked me and another of our friends, Matthew Brookes, to come and help open the event. Why? Because more than twenty years ago, Matthew built a Dalek in the school woodwork shop. We used to take it out to conventions, Longleat events and the like. It always required a two man team to operate it, simply because it was bloody hard work and taking it in turns enabled the other guy to have a rest. (It also helped to have someone following the Dalek around to stop over-inquisitive kids pulling bits off it.)
But that was then. Now, we're on the verge of middle age with responsible jobs and bills to pay. So when Nigel asked if the Dalek could open the fete, I wasn't really sure what to expect. (From Nigel's point of view, the draw of a Dalek would ensure a good attendance for the event. He merely hinted that a "special guest alien from Doctor Who" would be appearing - but the local press got wind of it and announced it would be a Dalek. Well, it did the trick, as apparently the fete was one of the best attended ever in the parish.) For Matthew and me, it was a journey into madness! The Dalek has been in storage for the best part of a decade, gathering dust and dirt and cobwebs in the back of a garage. Since we only got it out of storage the night before the fete, there followed several hours of cleaning it up and repairing minor damage. Remarkably, all the electrics still seemed to work - most importantly, the voice modulator. Nevertheless, we needed to visit Halfords as soon as they opened, and ask if we could buy a motorcycle battery (any make, any size, it didn't matter as long as it was 12V) and some wire and crocodile clips. It was only afterwards that Matthew realized they must have thought we were bomb-makers!
Next, we loaded the Dalek into a van and drove to Caversham - we put the Dalek together inside the church (a odd juxtaposition in itself!) and discovered that the voice no longer worked. Talk about frustrating. Matthew is something of a perfectionist and wanted to take the electrics apart to find the fault, but as Nigel pointed out, the kids had come to see a Dalek and it wouldn't be fair to disappoint them. There were also press photographers, and even a cameraman from Meridian TV - I don't know if we made it onto the news however. What I do know is, the inside of the Dalek seemed a lot more cramped than I remembered - and it was a damned sight harder to move the thing than I recalled. I had one go, but in the end I was content to let Matthew get on with it. As I observed the Dalek working the crowd, it was interesting to compare the reactions of the kids now to 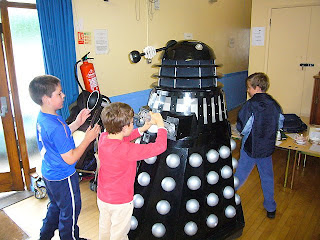 those of ten years ago. It's quite clear that they all know what a Dalek is, and they followed it around like it was the Pied Piper. Especially once Matthew got the voice working again - he was engaging with them, answering their questions, threatening to enslave them and conquer the Earth, and so on. I don't think any of them thought for a moment that there was a person sweating away inside it. Because it's a black Dalek, several of the kids automatically called him Dalek Sec as well. And another thing that happened - as I was following the Dalek about with a sonic screwdriver in my hand, more than one kid asked me if I was the Doctor. OK, I've got sideburns, but I don't look anything like David Tennant. I was able to improvise a bit of business where I said I'd deactivated the Dalek's gun, and handed the kids the screwdriver so that they could (temporarily) shut down its motive power - enabling it to pose for photographs with them! What that suggested to me though, was that those people who think Doctor Who depends on David Tennant's personal popularity and that the bubble will burst once he's gone, are very probably wrong. My experience is that kids will accept anyone with a sonic screwdriver!
I haven't said much about the new series so far this year. Don't worry, I still like Doctor Who, and I'll be talking about it very soon. Watch this space...
Posted by Andrew Kearley at 01:14 No comments: